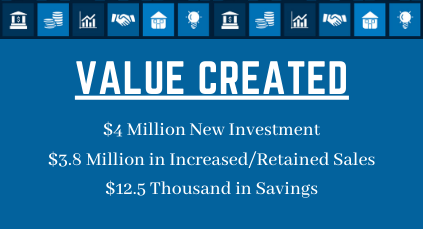 Meijer, a pioneer in the combined grocery and department store concept, opened their first superstore in 1962 in Grand Rapids, Michigan.  Today they have more than 200 locations located throughout the Midwest. Their stores average up to 250,000 square feet. Meijer, a family owned business, has consistently led the industry by being recognized as leaders in understanding and offering high quality foods and produce.

In 2014, Meijer began construction on a new Meijer’s Purple Cow Creamery in southwest Ohio. This 105,000 square foot dairy production and refrigerated warehouse was built near the 1.7 million square foot Meijer Distribution Center to optimize delivery to stores located throughout the Midwest.

The Meijer’s Purple Cow Creamery faced the difficult challenge of launching live culture products using specialized processes. To do so they needed to create over 30 SKU’s (stockkeeping unit) in an extremely short time frame. Meijer reached out to CIFT for expertise to scale up and develop the production operating procedures and quality control requirements for these new products.

When the project completed the economic impact was substantial. Meijer had increased/retained sales of more than $3.8 million as well as new investments exceeding $4 million. The Meijer/CIFT partnership also resulted in savings of more than $12,000 and five new jobs.

Read the next story