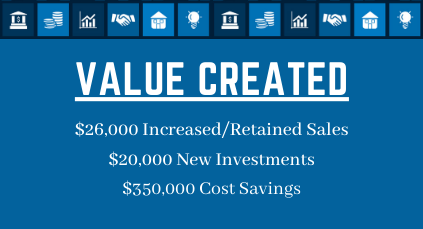 When mass production is key, but machinery investment is limited, NOCK is the answer.

Angry Irishman has been crafting award-winning hot sauces since 1996. They originated in Southwest Florida and today they travel all over the United States promoting their brand at hot sauce expositions and competitions. They have taken their hot sauces to the next level by not only bottling the sauces, but growing most of their own peppers.

CIFT provided Angry Irishman with access to the necessary certified equipment through the Northwest Ohio Cooperative Kitchen (NOCK). NOCK dramatically increased production from 1 product to 10 varieties and eliminated the need for Angry Irishman to invest in new, costly machinery. The two companies are currently working together to upgrade an existing Angry Irishman building to further increase production and co-pack for other companies.

“CIFT’s involvement has been imperative in allowing us to produce and package our products. The savings from using the NOCK for our food business has saved us by not only hundreds of thousands of dollars for building and equipment, but also invaluable knowledge from the staff.”

Angry Irishman has been shipped throughout the United States, Canada and even Australia through online shipping. It can be purchased at Frobose Meat Locker, Churchill’s and Kazmaiers, just to name a few.

Read the next story