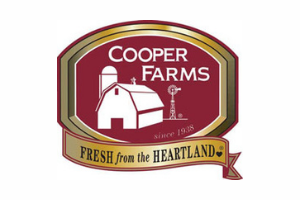 Cooper Farms is a family owned, diversified farm and food company based in Northwest and West Central Ohio, an area rich in agricultural tradition. The company originally started with one man’s idea to raise and sell turkeys to his friends and family. Now, Cooper Farms has grown into two hatcheries, a meat processing plant, an egg processing plant and feed mills for turkeys, hogs and chickens.

As technology has advanced and efficiencies with feeding have developed, turkey breast sizes have grown over the years as well. The cook pan that Cooper Farms was using no longer worked for the larger turkeys and they were looking to adjust the cook pan sizes. However, they were not sure what the ideal dimensions of the new pans should be. If they worked with their current pan supplier, they would have had to invest in a new mold which would cost around $40,000 just to get samples. So, if the new size did not work, they would have to continue to repeat the sample process until they found the ideal new pan size, resulting in thousands of dollars for testing.

With Cooper Farms being a long time member of CIFT, they reached out to see if CIFT had any connections that could 3D print a sample pan to conduct a trial run. CIFT’s large network worked in Cooper Farms’ favor and connected them with JuggerBot 3D to discuss a solution. Due to the shape and size of the pan, if JuggerBot 3D tried to print a pan, there was a strong likelihood that it could break and not hold up through the cook cycle and it would not closely resemble the finished product. So, the team decided to reverse engineer the pan to create a mold, which could then be used to create multiple pans, equivalent to the same material as the pans Cooper Farms is currently using.

By reverse engineering a mold, the team was able to supply Cooper Farms with 25 pans to conduct trial runs. This saved Cooper Farms $50,000 and they were then able to invest $40,000 in a new mold with their current pan provider that was tested and proven to work.

“Being a CIFT member has provided us with connections we never would have thought about before. We always thought 3D printing was more for auto manufacturing. We never thought we could find a use for it with turkey processing. It was really quite advantageous with speed, time and cost. I see the advantage of using 3D printing in the food industry to help me as a product development guy to create new items that our customers want.” Dale Siebeneck, Director of Product Development & Regional Sales at Cooper Farms